Colouring class in my shop 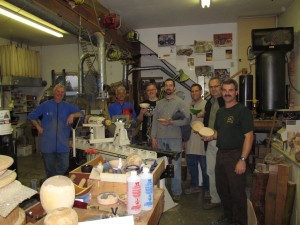 The gang of six plus one

A while ago a friend in the Greater Vancouver Woodturners Guild asked if I would tutor him in some of my techniques. David was specifically interested in my use of dyes and other colour mediums but was also interested in woodturning methods in general. He felt that there were a  few others who would be interested as well. After a brief discussion I felt I had a handle on his needs and we agreed to work on a date. He assembled five more interested fellows and we all agreed on November 6th. I had about a month to work up a lesson plan for a woodturning and colouring class based on their needs and assemble the materials I needed; bowl blanks, dyes, latex gloves, test blocks and various other necessities. I offered to provide (in truth my wife, Arlene provided) lunch and coffee just to make the day complete.

I have four lathes in total including my Oneway and three mini lathes, David organized two more so we had the six that we needed. I have enough room in my shop for six lathes with a bit of elbow room as well as room for a “colouring station” so we were set.  The day began with  my chainsaw and general old-stuff tour while everyone dove into the coffee and donuts (provided by one of the guys). I explained the layout, what we would be covering during the day then launched into a presentation on grain orientation with regard to design, function and tool requirements. Pretty basic stuff but we had a rank novice and a couple who had not done that much turning. 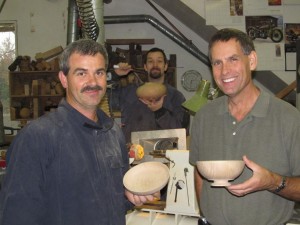 One apparently advanced to hollowforms 🙂

After discussion and demonstration, they turned  a small basic bowl that they could try some colouring techniques on later. Because David and one of the others were acomplished turners, I was able to move between the remaining four, helping them over hurdles as they got to them. Before lunch they were all at about the same stage and ready for a break.

Lunch was great. The hostess-with-the-mostest had everything ready for the troops and it was delicious. Before returning to the shop I took a few minutes to discuss some of my finished pieces in the house. By seeing the end result first, the methods that I discussed in the shop later would make more sense. 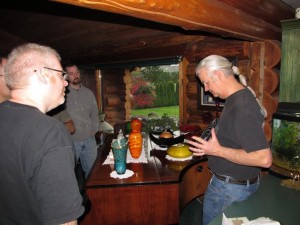 By 4 o'clock you should be able to do this.

Out to the shop again where everyone completed their bowls, sanded them using air-driven and manual sanders, finished the foot and carved the small center nub off with a power carver. I gave a short demonstration using dyes on a couple of different grain patterns then turned them loose with the dye on a pile of prepared sample pieces. They tried dying, sanding back, adding second colours and then a couple tried airbrushing and blending on their bowls. 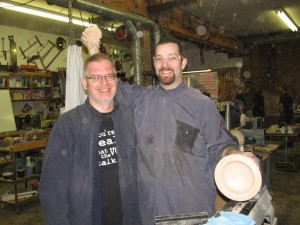 It was all business. No Tomfoolery.

It was a full day with all of them declaring they had a lot of fun. I have always enjoyed helping people learn new things and this day had been better than most. If the emails I received later that evening are any indicator, there will be lot more coloured turnings in future instant galleries.

I am a professional woodturner, specializing in gallery work, commercial work, teaching and demonstrating. I have been turning since 1958, so... a long time. I use this site to present my work to the public at large and to let people know that I am available for teaching private lessons in woodturning. Wood turning is one of my passions (the other is motorcycle touring). It is my desire to pass on everything that I have learned over the years to others so that the craft of woodturning will grow.
View all posts by Ed Pretty →
This entry was posted in Colouring wood, General and tagged airbrushing, colouring techniques, woodturning class. Bookmark the permalink.