Recently I had the opportunity to participate in a workshop led by Mark Sfirri. Mark is well known for his  multi centered turning resulting in some very unique shapes. Probably the most well known are his “Rejects from the Bat Factory” series. We turned everything between centers and because the centers were off-set, the workpieces initially wobbled wildly on the lathe, meaning we turned a lot of air until a fair bit of material was removed. Because of all the interrupted cutting that we would be doing, the possibility of a catch was inevitable. As for all demonstrators, safety is paramount, so Mark insisted that we all use cup-center drives when turning. 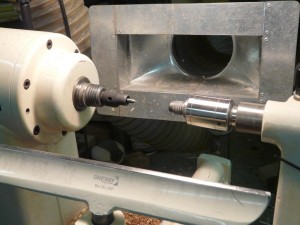 The use of  a cup-center drive was originally pioneered by Del Stubbs who found it to be an adequate but much safer drive than the typical spur drive.  The friction drive provided by a cup center provided adequate driving force without the disastrous results caused by the spur drive’s more positive connection  during a catch.

A cup-center drive is identical to the cup center used in a tail stock, ideally with a spring loaded center point, which is most helpful when turning multiple pieces (allows quick mounting and removal). You will notice the center point of the drive center is quite long. Because it is spring loaded it retracts into the center as the tail stock is tightened so the drive ring is then able to bear fully on the piece. A workpiece is mounted exactly as if using a spur drive, perhaps with a bit more end pressure than normal. As long as proper cutting practices are used, there is sufficient holding power to drive the work. If there is a catch, the work simply stops turning, then it’s a simple matter to re-tighten the tail stock quil and continue turning.  This is unlike a catch when using a spur drive where the wood continues to turn, increasing the drama with each revolution. There is a second major advantage that I can see: one tends to use proper cutting technique at all times.

A cup center was originally  supplied with my Oneway 2436  but I was skeptical that this would provide sufficient driving power: it ended up in my jungle drawer. During Mark’s workshop I found that it did, in fact, have sufficient driving power and I quickly became addicted to it. I  get very few catches but it is certainly nice to eliminate the excitement when one occurs. My cup-center drive now resides in my drive-center tray and gets used most often.

I am a professional woodturner, specializing in gallery work, commercial work, teaching and demonstrating. I have been turning since 1958, so... a long time. I use this site to present my work to the public at large and to let people know that I am available for teaching private lessons in woodturning. Wood turning is one of my passions (the other is motorcycle touring). It is my desire to pass on everything that I have learned over the years to others so that the craft of woodturning will grow.
View all posts by Ed Pretty →
This entry was posted in Lathe Safety, Lathes and Tools, Woodturning Tech Talk and tagged catches, cup center, cup centre, Mark Sfirri, Oneway lathe. Bookmark the permalink.